There have been two important drivers for the strong equity rebound in 2017.  First, dovish central bank policy and a weaker US dollar have resulted in looser financial conditions through the year which has been supportive of risky assets in general and of Emerging Markets assets in particular. Second, there has been an unusually benevolent combination of strong and synchronized global growth with stable bond yields.  1 Many investors are concerned about the length of this bull market, but economic cycles and equity bull markets do not generally die of old age. Structural bears are caused by unwinding economic imbalances or bubbles while cyclical bears are nearly always triggered by a tightening of monetary policy in response to inflation pressure.  1

With tax reform completed, many strategists are calling for increased corporate earnings.  Goldman Sachs Global Investment Research believes the S&P 500 2018 EPS will increase 14% to $150, and the index will reach 2850 by end-2018. They expect the S&P forward P/E multiple to remain near the current level of 18x through year-end 2018. 2

As the Trump presidency got underway, a pick-up in economic activity and pro-business optimism came to the rescue as the legislative agenda began hitting roadblocks. More than one year after the U.S. Election, progress on the fiscal agenda is finally gaining speed.  Tax reform has been completed and a regulatory rollback in the U.S. financial sector is making headway with a number of pro-deregulation political appointments, made in the second half of ‘17, and regulatory reform legislation likely to become law in early ‘18. Global growth is now on track to surpass expectations for the first time since 2010. 2

In 2017, geopolitical concerns between North Korea and the U.S. may have been beneficial in a way – aggressive campaign rhetoric of a trade war, especially with China, was toned down as the U.S. partnered with China on reigning in North Korean nuclear ambitions. Instead, the administration set its sights on NAFTA with attempts to modernize the agreement. 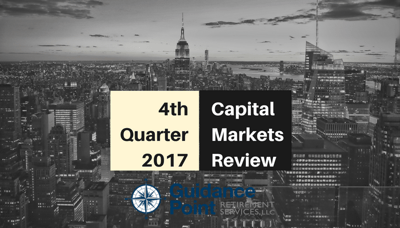 Fixed-income performance in the fourth quarter was mixed as the shape of the yield curve compressed to its flattest level since before the 2008-09 global financial crisis. After its December meeting, the Federal Reserve released its updated projections including the forecasts by board members for the federal-funds rate for the next three years of 2%, 2.70%, and 3% for years ended 2018, 2019, and 2020. 3

If you enjoyed this blog, be sure to check out these others:

Who Pays The Retirement Plan Fees? 4 Tips To Help You Decide